Hugs and Kisses in School… 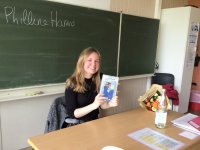 September 23rd, 2021, we were visited by a young author named Philine Harms who is from Hildesheim. At the beginning of the reading, Philine Harms introduced herself before she started talking about how she came into writing novels and finally publishing her first book.
At a very young age, Harms started writing books in German but soon switched to English to publish them on the e-book platform "Wattpad". After she had released her English book "Never Kiss Your Roommate" there, her followers were immediately enthusiastic about the story so that the publisher behind the platform "Wattpad" made Harms the offer to publish her book.
Belonging to the LGBTQ+ book genre, the story is set at an exclusive boarding school, where a so-called "Chitter Chatter Blog" reveals every secret of the pupils. In this environment a student named Evelyn realizes that she is attracted to her female roommate Noelle. Of course, misunderstandings and conflicts ensue and many more secrets are revealed in the process...
Philine read a few passages to us to which we listened eagerly. After the presentation, we had the chance to ask Philine questions on how to be an author, for example whether she could imagine to become a full-time author. She denied that, fearing she might lose her passion for writing if it became a true, money-earning 'job'. Another question that interested us immensely was writer's block and how she handles it. The advice she gave (leave it be, start on something different, or just sit down and doodle) might help us with our future papers at university.
It’s been an interesting hour with her and we wish her good luck with her projects.